As many of you probably already know my best friend and partner here on SAW DC, Norko passed away recently.

Our friend Jose put together that lovely tribute above, and I wanted to share it with the folks who read this site.

Norko was an incredibly kind individual, and I'm glad to have known him for these last 33 or 34 years (we became friends in 3rd grade). If you follow either of us on social media you may recall that we often shared photos of one another with the caption "Brothers." That was absolutely the truth. We were brothers in every since of the word aside from biologically. 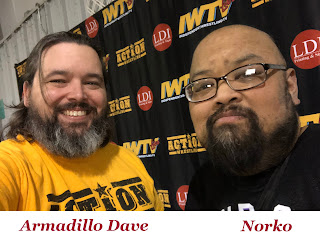 This isn't about us though, it's about him. He was just an absolutely tremendous guy. Supportive to his friends in so many ways. He loved pro-wrestling, and he loved supporting the Georgia independent scene (NWA WildSide, Anarchy, ACTION Wrestling, Atlanta Wrestling Entertainment specifically along with Tennessee's Scenic City).

Before his health gave way you ALWAYS knew when he was in the crowd too. You'd still see flashes of it recently such as during ACTION's B-Boy v Benjamin Carter match on February 7, 2020, but prior to that it was 100% all the time.

This site in part gets its name from the group of fans that he was the ringleader of up in Cornelia, GA during the NWA WildSide era. I was kind of a secondary member with Norko and Kyle being the guys I always considered the leaders (Jose who made this lovely video tribute among others were there a ton as well), but you knew when the South Atlanta Boys or SABs were in the building.

Many of you have probably heard me say that if you see any of those old WildSide pics that they pretty perfectly captured our personalities. You'll see Norko engaging in some shenanigans in the front row while I'm often standing behind or beside him with a grin on my face. I wasn't always involved in his shenanigans, but I always enjoyed them.

As all of this relates to our partnership on this site, the original idea was I would do WWE, toys, etc. while he'd be the guy who covered the indie scene. It never played out like that to the degree we wanted it to due to his health, but that was the premise. We were beginning to collaborate more recently which I think we both enjoyed.

To get a little more personal, Norko was absolutely there for me during one of the worst times in my life and I never could repay him for that. The beautiful thing was he didn't need to be repaid. Him being there for his friend was just what he did. I'm glad I was there for him at points too, but I cannot put into words how important his support during that difficult time was.

We've reached the point where I feel I've started to ramble so I will leave it with this...


Norko was loved...and he always will be.

Norko is missed...and he always will be.