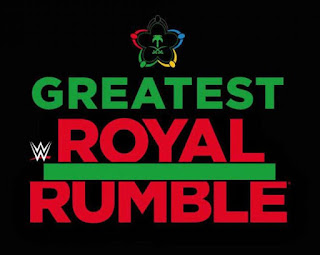 On Friday, April 27th (coincidentally the same night as the first ACTION Wrestling show in Tyrone, GA), WWE is heading to Jeddah, Saudi Arabia to put on the Greatest Royal Rumble.

What makes it so great? For one thing the match will feature 50 WWE Superstars. The more interesting part to me is some of the names announced for the match itself:
BRAUN, New Day, Randy Orton, Bray Wyatt, and Shinsuke Nakamura are mentioned as being part of the show in the press release, but those names above are specifically linked to the Greatest Royal Rumble Match.

I have my doubts whether a 50 man Rumble can be any good, but it will be quite a spectacle and I'm guessing that's what matters more here for this event.

The press release mentions Vision 2030, and Chris Harrington (@mookieghana) of the Wrestlenomics Podcast made mention of that as well. I had to Google what it was, and here's the Wikipedia piece on Saudi Vision 2030.

Basically, it's a plan to diversify Saudi Arabia's economic activities, specifically to lessen its dependence on oil. Events like this are part of developing these other activities.

Anyhow, no word on whether we will actually be able to see this in any shape or form, but it's an interesting event.

Almost forgot, but here's some information on the venue King Abdullah Sports City. It is pretty impressive looking.