Which Act Did You Prefer? Jinder Mahal/Singhs Or Seth Rollins/J&J Security 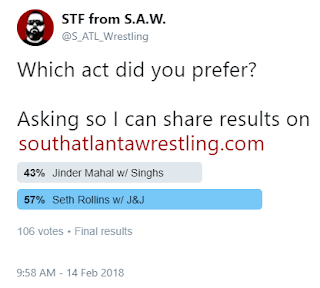 The question above was a random thought that crossed my mind the other day as I was thinking about the similarities in the two acts.

This was something that was discussed at the time, and while I don't remember if I voted in this poll or not, I always leaned towards Jinder Mahal and The Singhs.

For me, I think it had a lot to do with how the Singhs were instrumental in elevating Jinder. Seth Rollins didn't need J&J Security as much as Jinder needed the Singhs.

The Singhs' motivation made for a more compelling act as well as did their unwavering support for the Modern Day Maharaja.

Raw became a bit of a chore to watch during the Rollins Authority angle. Jinder's rise on SmackDown was a nice change of pace/breath of fresh air, and The Singhs were a large part of that. It wouldn't have worked nearly as well without them.

As you can see from the outcome of the vote, I am in the minority here. Honestly, I was impressed with the strong showing by Jinder Mahal's group. I figured Rollins would run away with this one.
Posted by FreebirdSTF at 10:49:00 AM