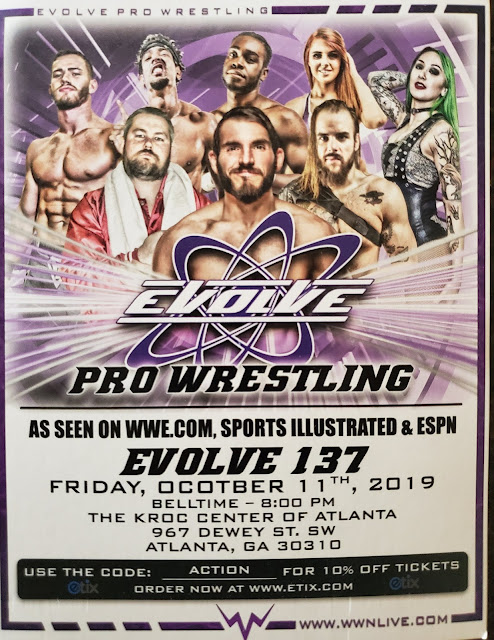 Some housekeeping here before we get started. I am aware that the flier says "OCOTBER." Neither my site or ACTION Wrestling designed it.

If you ARE going then use the promo code "ACTION" to save yourself a couple of bucks.

It's 10% to be exact, and there's literally no reason not to  use that when you buy your EVOLVE 137 tickets on Etix.

No, I won't actually be going to this show (unfortunately), but based on the talent on this graphic alone it looks like it will be a real good time.

WRESTLE ZONE has the matches, and meet & greet information you desire.

Out of the folks that I am most familiar with here, I can tell you that EVOLVE Champion Austin Theory, AR Fox, Curt Stallion, JD Drake, Anthony Henry, Leon Ruff, Adrian Alanis, Liam Gray, Slim J and Eddie Kingston are all worth the price of admission.

By my count at least 6 of those folks have appeared in ACTION Wrestling by the way.

That's not to speak ill of any name not expressly mentioned, but that's what I can tell you.

Aside from all that great action, the following NXT Superstars are available for Meet and Greets. (There's a separate charge for that AND you have to have a ticket to EVOLVE 137 to do this just to be clear).

My gut tells me this will be a good time for a great value so if you have any interest at all, use promo code "ACTION" and buy those tix today!
Posted by FreebirdSTF at 9:54:00 AM