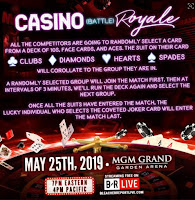 Saw the rules for the Casino Battle Royale at AEW's inaugural PPV, Double Or Nothing today, and I think it's pretty cool.

The rules have not changed from what was originally announced, but they've added the "drawing a card" aspect to it.

With the event being held in Vegas this connection works for me.

I get how some say it's too complicated, but adding a little sizzle to the steak doesn't bother me at all.

Ultimately, I think it's all about the execution. If they make the drawing of the cards fun, and exciting then it'll be great. If not, it's going to make it clunkier than necessary, but it will be fine either way.
Posted by FreebirdSTF at 2:46:00 PM