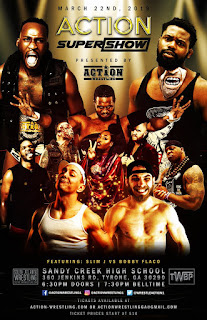 They also announced that AC Mack will be taking on an opponent that has not yet been announced in a NON-TITLE match.

This means that AC Mack (c) defending his ACTION Wrestling Championship against Fred Yehi at IWTV's Family Reunion during Mania Week is OFFICIAL!

Here are all the particulars about ACTION Wrestling 7 SuperShow's card at Sandy Creek HS in Tyrone, GA.

If you want thoughts and commentary on the card, then this post is for you instead!

It only costs $10 to get in the door, support a worthy cause, and witness some fantastic wrestling live!

**South Atlanta Wrestling is proud to be a sponsor of ACTION Wrestling 7!**

If you haven't started following ACTION on all social media accounts you need to get on that and ALL those links are available after the jump.


*If you're not a Independent Wrestling TV subscriber use promo code 'ACTION' for a 20 day free trial*
If you haven't done so already follow ACTION Wrestling on the following...